Looking for the perfect bit

I didn't get to work Larry yesterday, but I did make a flying trip to a Portland tack shop while Brian was in science class yesterday afternoon. I was hoping to find the perfect bit, but unfortunately, didn't. I did buy one, but I suspect I will be returning it.

When I tried Larry out I used Russell's bridle, which was outfitted with a bit we both loved; I think it was this bit in Aurigan. It was on semi-permanent loan from a friend, but between trying Larry and getting Larry, she asked for its return for her own use. If you clicked on that link, you will see that I was spoiled - and can't afford to buy my own Cadillac (or should I say Mercedes-Benz?)! 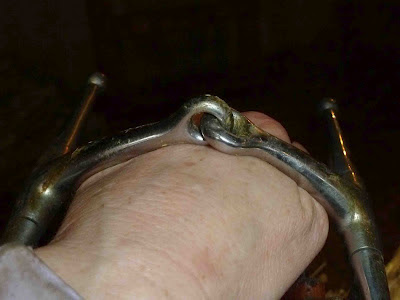 Since bringing Larry home I've been working him in the bridle I used on my Swedish warmblood mare, which is outfitted with a 5" stainless steel full-cheek simple snaffle. While I prefer a double-jointed snaffle that lays flatter across the tongue, she needed the stability of this bit - proving the point again that "one style does not fit all." Larry doesn't seem to mind the bit, but it looks a tad narrow on him to me. I would also like a thicker, milder mouthpiece to encourage him to take more contact. 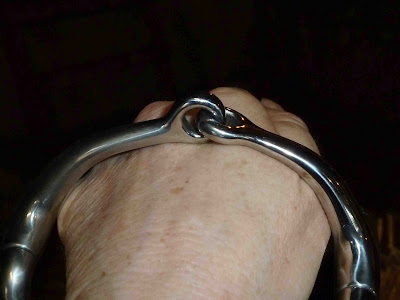 Last week I ordered a Korsteel bit online. It, too, is a stainless steel simple snaffle, but has a curved mouthpiece to eliminate much of the nutcracker action. Unfortunately, the mouthpiece is not as thick as I would like. 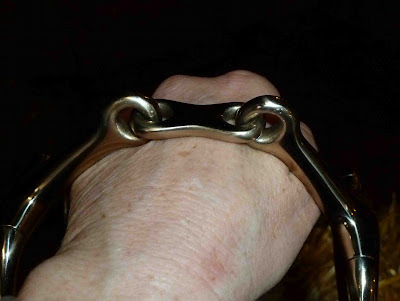 The bit I bought yesterday is a German silver French link snaffle. I would have preferred an oval link to the French link, but the shop didn't have one in German silver. I thought it might do, but the more I look at it, the less I like the way it would lay in the mouth.

Since I can't return either bit if I put them in Larry's mouth, I've been eyeing them critically and fretting about what to do. Then this morning, while rustling around in the little cabinet in our tack room, I came across a bit I forgot I had: It's a 5 1/2" Herm Sprenger loose ring, with a nice, fat mouthpiece in Aurigan or German silver. I decided to outfit Russell's bridle (sans flash noseband) with it and try it out on Larry today. 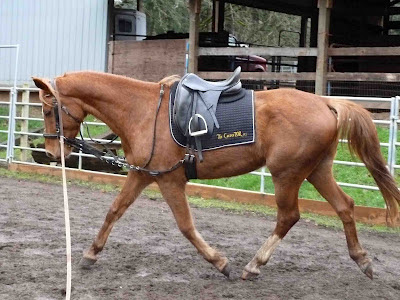 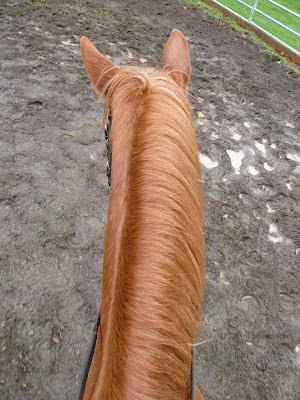 I can't say that I noticed any difference in Larry's acceptance of this bit, and as usual, he didn't generate any foam. I prefer eggbutt bits to eliminate the possibility of pinching, and would still like to try him in a fat, double-jointed snaffle with an oval link. So I will return the two I just purchased and keep looking, but am satisfied with the wider, thicker HS bit in the meantime.

What did make a noticeable difference in our ride today was carrying my dressage whip for the first time. He accepted it calmly and responded to it appropriately, and it greatly improved his lateral work and maintaining a canter. Given his body type and parentage, I really expected him to be on the energetic side, but he is actually rather lazy, requiring constant encouragement to stay moving either on the lunge line or under saddle. I didn't ride hard or long, but it was productive, and generated the first sweat I've seen on him - just a little down the front of his neck and chest and around his girth. 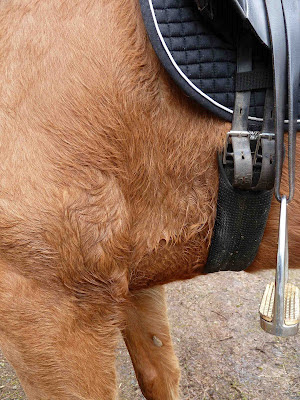 Hi. Its really interesting to hear your thoughts in detail since deciding on a bit can be quite tricky. It really is up to each horse's preferences. I've just gone through the process with my new horse that I jump and do dressage on. I tried similar bits to those you are trying. If it helps you any, I did find that the loose rings had a slightly less 'deadening' effect and eventually somehow encouraged my horse to start mouthing a little bit. I think they provided a little bit more mobility in the mouth. But of course its really up to each horse, your hand and your leg.
Good luck, Tanya

Thanks for your comment, Tanya! Yes, as with everything else, the choice really should be up to the horse, because they are individuals with preferences just like us. Unfortunately, it can take a lot of time and expense to figure those preferences out.

Oh, I do like this newest picture of Larry at the trot! Maybe he'll be a bit less lazy after he builds some more muscle? Good Luck!

You know, I think I have a loose ring link snaffle (Korsteel) in the barn. Might be on Nicks bridle, but frankly, a simple snaffle a bit narrower than what I have would be better for Nick on the trails. I'll check.

Thanks, Theresa, but Laura is already sending an eggbutt oval link snaffle that she can't use; let me try that first. I looked carefully at Larry's old show photos and he was going in a loose ring then, so a loose ring may be good for him. I'm going to keep riding him in the one I've got until Laura's arrives to try.

I have a huge assortment of bits. And my husband asks me "why do you keep all those bits if you don't train horses anymore". My response "Well, Max, won't be around for as long as I plan on riding so my 'new' horse may need a different bit"
He just rolls his eyes. That's alright. His horse will need to be replaced sometime down the line and he will be glad of the assortment of bits then.
I do love bits. I have some I would never put in a horses mouth, but I still like having them around to show people what NOT to get.
Good luck with your bitting.