I drove over to Lincoln City this morning to walk Lance. His breeder and I were shooting for four days of walking in a row with a mind to try turning him loose in the indoor arena at the end of it. But last night I fretted to Rick on the phone (he's in Anaheim attending the American Association of Equine Practitioners convention) about the risk of re-injury, and he agreed that it would be better to err on the side of caution. Still, I hadn't ruled out the possibility of letting him loose to roll at the end of his walk....

Being the mellow boy he usually is, I planned on doing most of Lance's walk under saddle. So I brushed him off and proceeded to tack him up. Talk about trying to "hit" a moving target! Buckling the flash attachment was particularly challenging. Lance is a very busy, mouthy kid, and he did NOT want me limiting his options! 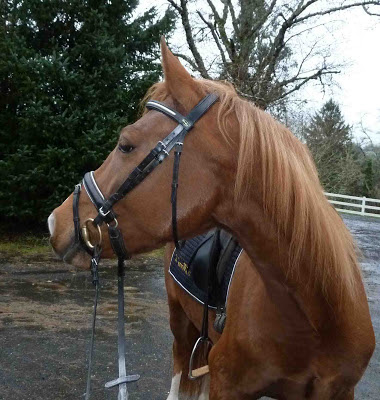 Being a sensible person, I headed into the arena to hand-walk Lance for a bit before mounting. He proceeded to explode into airs above the ground nine different times, leaping, bucking, kicking out behind, rearing, and assorted combinations of all of the above. Part of it was pent-up energy, but I do believe he was throwing tantrums over being cinched and buckled from the git-go. I managed to hang onto the reins and stay out of harm's way, and eventually he settled down and just walked. Well, I shouldn't say he just walked; once the hissy-fits ended, the mouthiness increased. I finally got on in self-defense (and to preserve my reins) – and then could hardly get the lazy thing to move at all! But you can be sure all thoughts of turning him loose for awhile were long gone....

I'm going to try to make it out to walk him again next Sunday and Tuesday. Val will hopefully be able to walk him this Wednesday and Friday, but then she will be unavailable until the following Wednesday. I don't want Lance to self-combust in his stall – or hurt her next week.

Next up, my fantastic, free refresher on fundamentals!
Posted by Michelle at 9:22 PM

As a friend in Pennsylvania says, "Silly goombah!"