The saga continues. Rick talked to the specialist at UC/Davis in charge of a clinical study on EMPF. Diagnosing the disease via lung biopsy isn't clearcut; if you happen to sample a healthy spot, the virus* won't show up. He told Rick to do another lung lavage using a LOT of fluid to get to the bottom of the lungs (where ultrasound showed the most compromise) and send the sample to him; he'll read it for us. If Lance does have EMPF, the drug in the clinical trial isn't necessarily the best option; steroids seem to work the best, which we're already administering (Really disappointing. Was hoping for a cure, not maintenance with potentially damaging drugs.) If Lance doesn't test positive for EMPF, there are other things that can cause his issues. The most likely is non-responsive COPD/heaves. Ruling out Cushings is important; we might know that by the end of this week. The lavage is supposed to happen later this evening.

*The researchers aren't sure if the fibrosis and the virus are the same thing, or if one causes the other, so even the disease process isn't well understood. 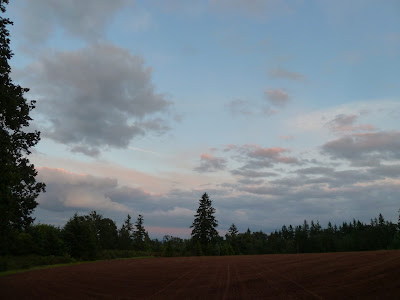 In the meantime, Lance and I go on easy trail rides, I keep pouring the feed to him (that's working, at least), and he keeps losing hair. The other evening I was shopping online for a durable fly sheet to give him some protection; all I need is for him to get skin cancer on top of everything else. =:-O  I wasn't sure what size to order, so I held off until I could check the sizes of his other clothing the next morning. While digging around in the tack room, I found a new-in-package polypropylene fly sheep that I had apparently picked up on clearance sometime. Woot! It's a tad large, but it works and doesn't make him hot like his turnout sheet. 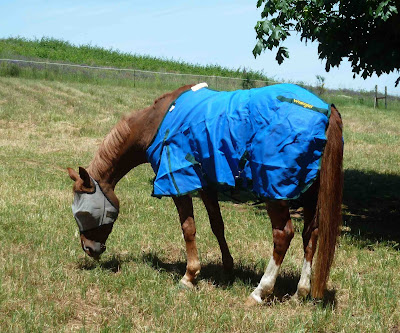 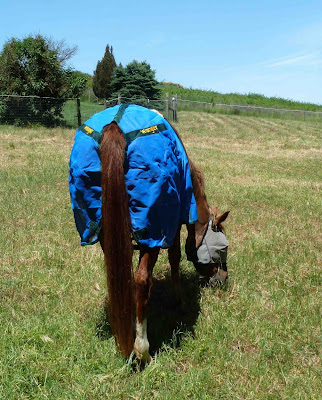 Incredibly, Oliver has also been having trouble. I've noticed occasional coughing; it sounded like he had something caught in his throat. Well, when Rick and Brian went to the barn Monday evening he was in obvious distress and breathing hard. Turned out to be broncho-spasms, as IV steroid didn't do much but a broncho-dilator did. The pollen count is high this year and Rick has a number of patients (and a wife) suffering from seasonal allergies; we'll keep an eye on Oliver, too.
Posted by Michelle at 7:03 PM

Michelle - since Oliver is now affected, too, is it possible that there is something in the barn that is causing these problems? I realize a barn is, well, a barn - full of dust, hay, etc., but could something else have gotten in to the mix?