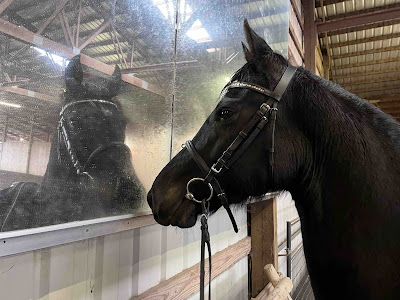 After being able to resume more frequent schooling sessions this month, I decided it was time for another lesson with Suzan. I texted her on Sunday, and she said she could fit us in this morning!
It was a drizzly day; I was thinking I might have to walk Stella up and down the barn aisles in lieu of a warm-up. But the lesson before us finished early so Suzan ushered us into the indoor arena. Suzan noted that my saddle isn't sitting balanced on Stella's back, and suggested I use my CorrecTOR pad with shims to lift the cantle. She also noted that Stella has filled out some since our last lesson and is croup-high, meaning she's grown. Hopefully her front end will follow suit....
As before, Suzan was worried that I was going to just get on without lunging Stella first, but after a minute or so of high tension, Stella settled well and we got to work on her, and me. Below are my notes, which I sat down and typed as soon as I got home so as to forget as little as possible!
Use sustained half halt to slow Stella's walk down to a steady, four-beat "3," then ease out of it (not abrupt release) while keeping the clear four-beat walk, BREATHE, and become a wet sandbag in the saddle. If she gets tense or hurried (often!), repeat. and keep repeating as needed. Don't pull on the reins; the half halt should be in my body and legs. If she dives down, squeeze her up with inside leg; if she gets high with her head, follow with my hands. Keep my shoulders down, neck back into collar, chin up (not tucked); look forward between her ears. BREATHE. Let my hips move when she relaxes (think "move with her ribcage/encourage her ribcage to move"). BREATHE.
Most of this applies to trot as well; stretch left side and don't twist torso.
If she startles or spooks at something, let her stand (stroking) until her energy comes down if possible.
Before asking for shoulder-in, do a slow volté (half halt!) and push her hindquarters out, then continue down the wall with that bend. Harder to the left; think "swing her ribcage in a pulsing motion."
Stella did so much better than her first lesson in the indoor. She really wants to scurry along and got frustrated at times that I wouldn't let her go in her default quick, tense pace, but she tried. Suzan remarked on how much better she was today, too. It was a good lesson. 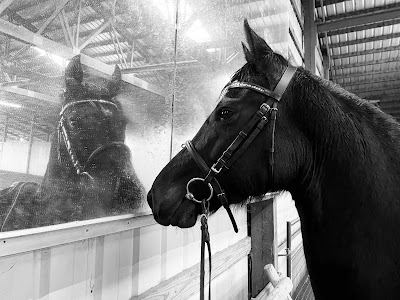 I just got a different saddle pad for Coco because she now has a bit of a sway back, she is 22. It goes over a western style felt pad. I am trying it for the first time later today I am so glad that most of us are now aware of saddle fit and balance. Although hubby will not correct his saddle which gives him a "chair seat"He needs a seat riser in the back. His horse Knight seems fine with it...and I feel his back every now and again. So you are teaching Stella leg yielding, I am impressed.

Suzan is absolutely the best I've ever met at assessing saddle fit, imbalances in the rider, and discomfort anywhere in the horse. While I dread another "saddle fit saga," when she says my current saddle will not work for Stella forever, I believe her. But why are we surprised that each horse might need a different saddle? How many of us would be comfortable wearing someone else's shoes? Yes, I've been doing leg yields and shoulder-in with Stella for quite awhile; Suzan gave me tools to make them better. 😁

I never thought about saddle fit before - it's clearly important!