Yesterday my dressage mustang got to be a cow pony! It was my husband's idea after I suggested we go for a family ride; he likes to play with cows on horseback even though he no longer has his cutting horse. I'm all for giving horses new experiences and schooling in new settings (all my horses have been exposed to working cattle thanks to my husband's interest), so off we hauled to a friend's little indoor arena. 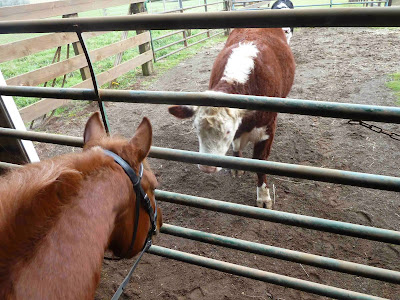 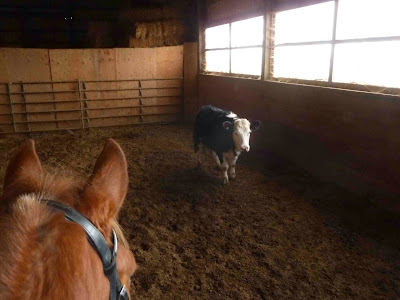 This was only the second time Lance has seen cattle, and the first time for him to be in close quarters with one. Approaching them was okay; having one advance on him was another story entirely! He never lost his head completely, though, and in the end he learned that he could make the steer move, a great first lesson for a young horse. Then we cooled our horses out on a lovely little trail ride through the woods on our friend's property. 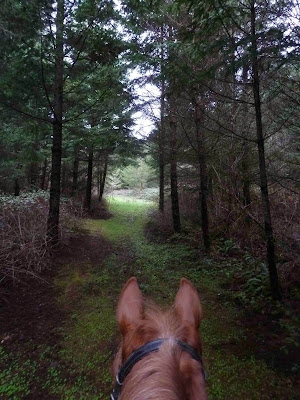 This makes the second family horseback outing in as many months; if Rick agrees to go to the beach again on New Year's Day, that will make it three for three. I say; why not make it a monthly habit!?!

So, Rick going to allow himself another cutting pony one of these days? Cooper use to wig out when young when we stumbled into free range cows out here. He could hear them, and smell them, but they were big fearsome things rattling in the deep brush. Dandy always freaked at llama's. Cooper grew up with them. I think a ride at the beach once a moth is a great New Years resolution!

You know, I think I could make that New Year's resolution now that my friend Kate has a riding horse again! I rather doubt Rick will get another cutting horse; if he does, it would be after one of our current three passes. Three really is all we have room for, not to mention the cost of hay and how seldom Rick rides….