Every dry day is a blessing

We returned home from our Thankgiving trip late last night under clear skies. I caught the weather forecast before going to bed and was relieved to hear that there were a couple more dry days in the forecast. I knew Horton would be in need of exercise; it's not good to 'get them fit, then let them sit.'

This morning when I did chores I found a note from the person who did our farm chores while we were gone. She wrote: "Horton was a good boy until today! He was bucking and kicking from his stall to his pen. He kicked the back wall and may have broken a board." Oh my! I decided some turn-out was in order, so after he'd had a half-hour to eat some of his breakfast, I took Horton to the arena to expend some of that pent-up energy. When I removed his halter, he just stood there looking at me until I shooed him away; then all he did was trot to the other end and look for something to eat. That's it.

I went back to my chores, keeping an eye out for more activity. Finally, he rolled. 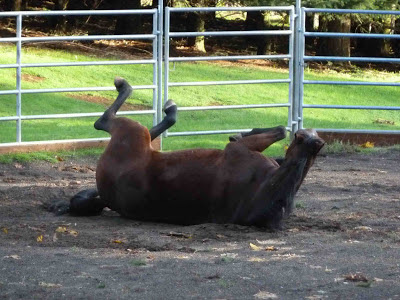 When he got up from that he did explode – but after two big bucks, he went back to grubbing around for greens. It took some encouragement with the lunge whip to get him to actually exercise! 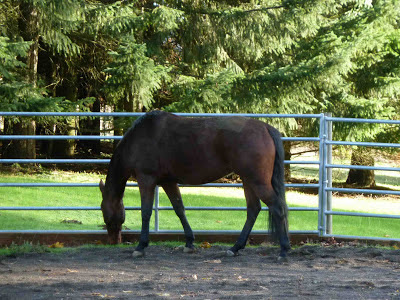 I didn't have time to ride until later today. Horton was good on the lunge line, but it took a lot of encouragement to get him to canter under saddle, especially to the left. He never got cranky or balky about it, so I gave him grace in case of discomfort.

Rick is planning to do the injections tomorrow morning. It will be interesting to see if they make a difference!