Yesterday Sylvia came out to ride her horse again. I lunged him first – not to "take the edge off" which seems to be the reason most people lunge, but as the quickest and easiest way to get him thinking forward. Horton's no longer a "balky-butt," but we still have to work through "stickiness" – his reluctance to move freely forward – on a regular basis. When I finally get him moving forward he is lovely, but it can take awhile to get him there.

Getting his gears moving on the lunge line seemed to work; Sylvia had her best ride on him yet, at least here. As you can see, it was a beautiful day! 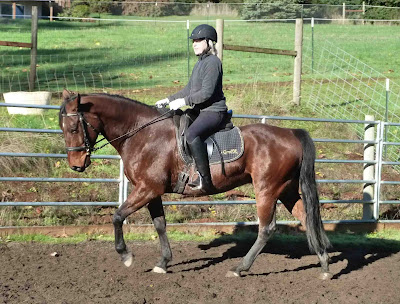 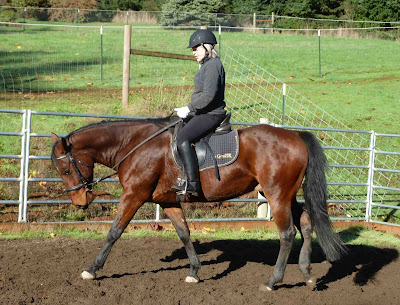 After his schooling session, Horton got a haircut. No, not a body clip or trace clip; more like a "hip clip." 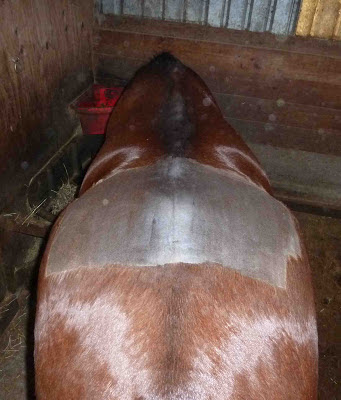 When Sylvia was out Tuesday, Rick happened to come down to the barn and watched us ride Horton for awhile. He asked, "Does he always carry his tail to the left like that?" Sylvia answered, "Always. It gets better for awhile after he has bodywork done on him, but eventually he returns to carrying it to the left; never to the right." Rick pondered out loud whether or not Horton might have something going on in his pelvis; if he does, it could explain not only the tail carriage but perhaps the behavioral issues he's had. Sylvia gave Rick the go-ahead to investigate, so he did that yesterday morning after our ride.


Shaving the area to be ultrasounded gives a better image; hence the haircut. (Rick also ultrasounded the pelvic area from the inside, but I didn't figure anyone really needed to see a photo of the vet with his arm up the rectum!)

The verdict? Horton's lumbosacral and sarcoiliac joints both look "wonky." Yeah, a real technical term, but since Rick has never seen joints that look quite like Horton's, it fits. No way to know the cause, since Horton's early history is veiled; could be the result of injury or even congenital. Rick is going to inject the joint areas with steroid to see if that makes a difference in his behavior and movement (he didn't have the incredibly long needles with him yesterday).

Once again all involved were reminded that horses always have a reason for their actions, be it pain or past experiences. They don't spend their time thinking about how to get out of work just because, and many horses put up with an amazing amount of discomfort and continue to try their best for us until we finally figure out there's a problem and do our best to make it better. It is also a good reminder that all the bodywork/chiropractic/essential oils or whathaveyou cannot fix damaged tissue. It might make our horses feel better for a bit, but the underlying problem needs proper diagnosis to be properly addressed, whether with rest, drugs, therapies like extracorporeal shock wave, a change in usage or all of these combined. 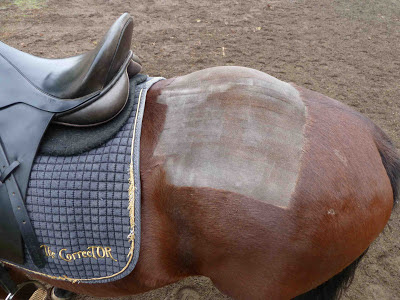 As for usage, Rick said it was fine to go ahead and ride Horton; he'll need a couple days off after the injection but that's it. So I rode this morning . . . obviously with a different mindset about the task at hand. I didn't lunge Horton first; I did spend a lot of time warming up at the walk on the buckle. Horton loves to go on the buckle, reaching his head down for a good stretch over the back. Makes me wonder if that stretch feels particularly good for his wonky joints. Anyway, I tried to fix any stickiness through a "back door approach," and eventually got lovely walk/trot/canter work both directions. I would love to be able to keep building on this, but next week is forecast to be very wet, starting this weekend, and we will be gone over Thanksgiving. I'll be looking for breaks in the weather whenever I can catch them!

I have been thwarted in my plans to drive over and walk Lance this week, so I was so relieved to get a phone call from his breeder yesterday. She's been very faithful in getting him out nearly every day this week, and he is behaving himself much better now. I'm hoping to get over there on Sunday, and then Rick is scheduled to ultrasound his injured ligament on Tuesday to see how it's healed.
Posted by Michelle at 12:03 PM

Well, this is good news in a way as the steroids may help and Horton can move forward much better. If he does work better on a long rein, I hope his owner continues to add that in to his riding regimen. Michelle, my old guy was a very hot younger horse and now is ridden almost entirely on a long rein. Theresa has seen him work. Granted, he was not a dressage horse, but did travel "on the bit" and "coming from behind". I now work him that way just a little but usually let him pick how to carry himself comfortably. Good luck getting over to your new horse tomorrow.

It's so great that you and Rick can work together as a team the way you so often do. Good for you guys, and good for the horse :-)