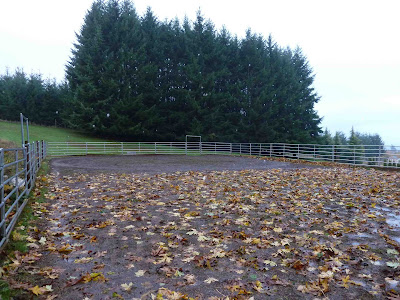 It has been a grey, wet week since Monday's unexpected break. There have been some short dry spells here and there, but never when I could sprint to the barn and get Horton out for some exercise.

Since I don't like to let a horse sit for more than two days at a time unless I'm out of town, yesterday was a "must exercise" day. The dry spells came and went while I worked hard at other obligations until I got down to the wire on time (I had an evening meeting) and daylight. So I put on a waterproof jacket, fitted Horton with lunging surcingle and side reins, and worked him in the drizzle at the far end of the arena. Rick had cleared it of leaves earlier in the day so I had at least a 20m circle in which to work. It got quite windy Wednesday night and a lot of leaves came down, but there are many more to fall before we can do our annual arena "deleafing." Keeping the organic matter to a minimum keeps drainage at a maximum – a necessity for our long, wet winters.

This morning was forecast to be dry, so "riding Horton" was right after "chores" on today's to-do list. But chores took a bit more time than usual. When I opened the barn door, the aisleway was a MESS. My husband apparently neglected to latch Horton's stall door when he did chores last night, and Horton had helped himself to the hay. (By design, that is ALL that is accessible; our grain is kept in barrels on an upper level.) Horton must have eaten his fill, because even though his stall door was wide open, he was standing in his paddock. Oh well, at least he had a nice, full tummy! He was a very good boy during our ride (just like he was yesterday on the lunge line), maintaining consistent contact and taking his canter departs quite nicely from aids alone, no vocal cues.
Posted by Michelle at 1:05 PM

Tricky little rascal! A little delayed "trick or treating" maybe? Little piglet was probably too full of hay to give you any trouble. What do you do to clear the leaves from your arena? Leaf blower? Or good old fashioned rake and bag?

If they aren't wet (heh; like that ever happens HERE!) a leaf blower would work, but we end up having to rake . . . and rake . . . and rake, usually onto a tarp that takes two of us to drag out (but it holds much more than a bag).

Well, he's not the Great Brown Hoover. The shed is now mine all mine, and I'm moving the feed in there tomorrow, so that the Great Red Hoover won't have access to anything other than hay, either!

Glad you had a good ride!!

If there is an open door? Glad he was ok though, you never know what they`ll get up to.